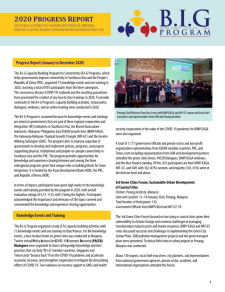 Established in 1994, the Brunei Darussalam-Indonesia-Malaysia-Philippines East ASEAN Growth Area (BIMP-EAGA) aims to accelerate the socioeconomic development of less-developed, marginalized, and geographically remote areas in these four countries as part of a broader goal to narrow the development gaps, not only among ASEAN Member States, but also within them. BIMP-EAGA covers the entire sultanate of Brunei Darussalam; the provinces of Kalimantan, Sulawesi, Maluku and Papua of Indonesia; the states of Sabah and Sarawak and the federal territory of Labuan in Malaysia; and Mindanao and the province of Palawan in the Philippines. The subregion covers a land area of 1.6 million square kilometers with an estimated population of 80 million.

Brunei Darussalam has an active role in the BIMP-EAGA subregional cooperation program and has made a significant contribution to trade facilitation in the subregion.

More on Brunei Darussalam in adb.org

Indonesia boasts the largest economy in the Association of Southeast Asian Nations (ASEAN), and the 16th largest worldwide. Its economic growth since 2009 has helped lift over 3 million Indonesians out of poverty.

More on Indonesia in adb.org

Malaysia has made huge strides in socioeconomic development over the past 4 decades, transforming itself from an underdeveloped country reliant on natural resources into a middle-income country with a vibrant manufacturing sector.

More on Malaysia in adb.org

The Philippines is among the fastest-growing economies in Southeast Asia, with upgrades to sovereign investment ratings confirming improvements in the country’s macroeconomic fundamentals. The government has defined its development objectives as driving rapid but inclusive economic growth, accelerating employment on a massive scale, and reducing poverty.

More on the Philippines in adb.org